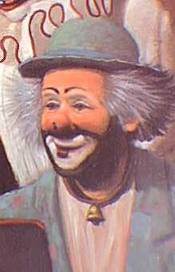 Mark Anthony was born Mark Galkowski in Norwich, Connecticut in 1915. During the depression, he first joined the circus in 1937 in South Carolina. Except for a two-year stint in the Merchant Marines during World War II, he spent most of his life working with various circuses: Sells-Floto, Harris Show, Dan Rice Circus, Clyde-Beaty-Cole Bros., and Ringling Bros. and Barnum & Bailey. Although in early years he was seen as a whiteface, throughout the past decades he has been a unique tramp clown. He spent four years working with a circus in Australia, and 10 weeks in the Soviet Union.

Mark Anthony was a master sculptor and prop maker as well. He loved to carve and has created hundreds of different clowns from wood, foam, paper mache, and other products. His carved animal props were very realistic. Mark Anthony was inducted into the 1989  Clown Hall of Fame.

You may also be interested in his photo gallery at Clown Pictures.