Modern Times begins with Charlie Chaplin as Charlie the Little Tramp gainfully employed at a factory.  Although the strict regimentation is driving him to the brink …  And then over the brink, when the factory owner has him as the “guinea pig” for a “time-saving” feeding machine.  This leads to Charlie spending time in a mental hospital.   Cured after his breakdown, he is arrested and jailed.  After he innocently picks up a red flag that has fallen off the back of a truck and runs down the street to return it.  Just when a communist demonstration comes around the corner. He meets Paulette Goddard as “The Gamin” (a street urchin) in the back of the police van.  She has been arrested for stealing bread. From then on the theme is about the two trying to get along in … modern times 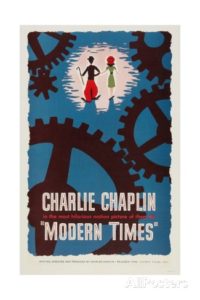 Many people consider Charlie Chaplin‘s classic film, Modern Times, to be Chaplin’s commentary on modern society, the dehumanization of the workers, the madness of modern society driving people mad, and various other themes.   All of these are valid, but at its’ heart, Modern Times is a love story.  A love story between Charlie the Little Tramp and a street urchin that he befriends, played by the lovely and talented Paulette Goddard.

Charlie Chaplin is in glorious form in this legendary satire of the mechanized world. As a factory worker driven bonkers by the soulless momentum of work, Chaplin executes a series of slapstick routines around machines, including a memorable encounter with an automatic feeding apparatus. The pantomime is triumphant, but Chaplin also draws a lively relationship between the Tramp and a street gamin. 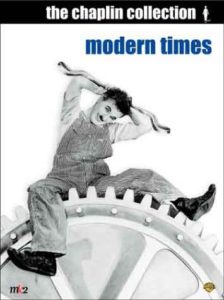 She’s played by Paulette Goddard, then Chaplin’s wife and probably his best leading lady (here and in The Great Dictator ). The film’s theme gave the increasingly ambitious writer-director a chance to speak out about social issues, as well as indulging in the bittersweet quality of pathos that critics were already calling “Chaplinesque.” In 1936, Chaplin was still holding out against spoken dialogue in films, but he did use a synchronized soundtrack of sound effects and his own music, a score that includes one of his most famous melodies, “Smile.” And late in the film, Chaplin actually does speak — albeit in a garbled gibberish song, a rebuke to modern times in talking pictures. —Robert Horton