The Great Dictator is possibly the most well-known of Charlie Chaplin’s films.  It was a timely satire on Nazism and fascism in general, and Adolph Hitler in particular. In it, Charlie Chaplin plays a double role:  Adenoid Hynkel, autocratic dictator of Tomania who blames the Jewish people for all of society’s ills.  And a Jewish Barber who happens to be the spitting image of Hynkel. 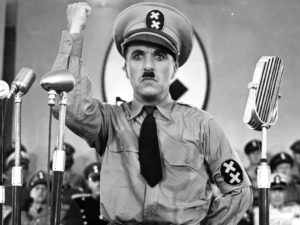 Contrary to what some people believe, the Jewish Barber was not Chaplin’s world-famous tramp character, although they clearly share some of the same traits. The film is a true classic, with the famous “dance with the globe”.  Where Hynkel dances with an oversized inflated image of the globe, fantasizing about his eventual conquests. The film ends with the famous “Look Up, Hannah” speech which is, perhaps, both verbose and even hokey, but it fits properly and plays well. 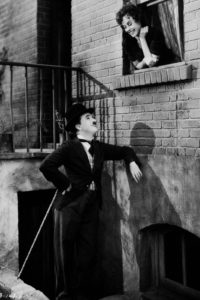 Since Adolf Hitler had the audacity to borrow his mustache from the most famous celebrity in the world – Charlie Chaplin – it meant Hitler was fair game for Chaplinâs comedy. (Strangely, the two men were born within four days of each other.) The Great Dictator, conceived in the late thirties but not released until 1940, when Hitler’s war was raging across Europe, is the film that skewered the tyrant. Chaplin plays both Adenoid Hynkel, the power-mad ruler of Tomania, and a humble Jewish barber suffering under the dictator’s rule. Paulette Goddard, Chaplin’s wife at the time, plays the barber’s beloved; and the rotund comedian Jack Oakie turns in a weirdly accurate burlesque of Mussolini, as a bellowing fellow dictator named Benzino Napaloni, Dictator of Bacteria.

Chaplin himself hits one of his highest moments in the amazing sequence where he performs a dance of love with a large inflated globe of the world. Never has the hunger for world domination been more rhapsodically expressed. The slapstick is swift and sharp, but it was not enough for Chaplin. He ends the film with the barber’s six-minute speech calling for peace and prophesying a hopeful future for troubled mankind. Some critics have always felt the monologue was out of place, but the lyricism and sheer humanity of it are still stirring. This was the last appearance of Chaplin’s Little Tramp character, and not coincidentally it was his first all-talking picture. –Robert Horton 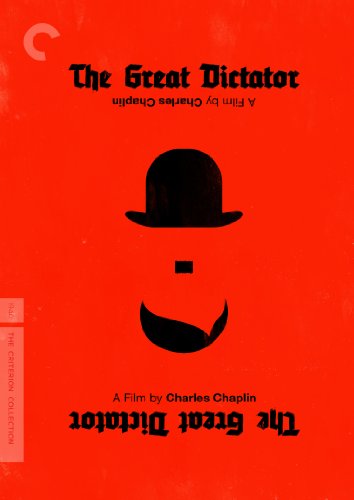 Trivia about The Great Dictator:

Kevin Brownlow and Michael Kloft’s absorbing documentary, “The Tramp and the Dictator”.   It backgrounds Chaplin and Hitler (who were born a few days apart).  It gives a detailed account of The Great Dictator‘s production. Twenty-five minutes of color footage, shot by Chaplin’s brother Sydney on the set, provides a fascinating look behind the scenes. –Robert Horton

The Sin of Harold Diddlebock