The Caddy is an above-average Lewis and Martin comedy, with singing by Dean Martin (including the Academy Award-nominated “That’s Amore” ) and slapstick antics, and pathos, from Jerry Lewis.

The movie begins with a bang, showing Joe Anthony (Dean Martin) and Harvey Miller, Jr. (Jerry Lewis) doing their zany, manic stage show—one of the highlights of the movie.  Backstage, a reporter tries to get the story of how the team came together, and Joe’s father tells the story. The bulk of The Caddy is then told in flashback, telling that story.

Joe Anthony’s family runs a restaurant and fishing business.  And seasick Joe travels the country trying to find his own niche, against his father’s wishes.  Likewise, Harvey Miller Jr. was raised to be a golf professional like his father and is indeed an excellent golfer. However, he is petrified in front of crowds, and so is unable to play in tournaments.  He is fired from a series of jobs, the most recent being a department store.

In a wonderful bit of slapstick comedy, Jerry Lewis destroys much of the department store as his boss is chasing him in order to fire him, with a classic bit of prop comedy as one knocked-over display knocks over another in a domino effect, with Jerry Lewis being tossed back against the shelves, causing all of the shelves to collapse and all of the fine china on display to break.  At his fianceé Lisa Anthony’s (Barbara Bates) suggestion, Harvey decides that since he can’t golf, he can teach, and will start giving golfing lessons. 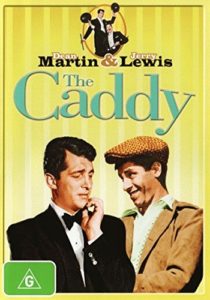 Harvey goes home with Lisa (no, it’s not like that—he rents a room from Lisa’s parents).  After Harvey is asleep, Lisa Anthony’s brother Joe comes home and sneaks into his old bedroom to go to sleep.  Except, of course, that Harvey’s sleeping in there.  After a short confusion, all gets worked out, and the following night is a ‘welcome home’ party for Joe.  Giving Dean Martin an excuse to sing “That’s Amore”—which earned the movie an Oscar nomination.  Joe comes upon Harvey giving his sister (and Harvey’s fiancée) Lisa a golf lesson, which inspires them to have Harvey teach Joe golf in order to win tournaments.  And pay off the large boat that Joe’s father bought upon Joe’s return home.

This works, and the lower-class Joe and Harvey are fish out of water at the upper crust at the country club, where Dean meets and falls in love with high-society Kathy Taylor (Donna Reed).  While there, the two are separated, with Harvey spending time with the other caddies while Joe spends his time with the upper-crust fellow golfers.

Despite Harvey’s warnings, Joe goes to a dance party with Kathy.  And when Joe is late, Harvey goes to retrieve him.  Hilarity ensues when Harvey interrupts Joe’s singing, cracking up one of the other party goers (later revealed to be a talent agent).  Joe won the tournament but is forced to donate the $500 winnings to charity.

Kathy then takes Joe to her mansion, where he promises to practice every day—although he leaves his clubs behind.  Harvey tries to sneak into the mansion, where Joe is putting on airs, and Harvey does a very funny turn at impersonating an upper-crust person with his rendition of “The Gay Continental” which had my 12-year-old daughter in stitches.  In order to stay by Joe, Harvey becomes an inept waiter.  He ruins a party, miscommunications happen, and Joe leaves in a huff.

The big tournament is about to begin, and thanks to intervention from Harvey and the police, Joe shows up in the nick of time.  However, Joe’s family shows up as well.  One thing leads to another and ends with a near-riot at the golf course.  The agent is there again (as well as at the party that the boys broke up) and tells them that they are wasting their talents, and should be on the stage.

In the end, everything works out, since we know from the start of the movie that they did get on the stage, and all is well.  The movie ends with a very cute “cameo appearance” by Dean Martin and Jerry Lewis in their own movie.

The origin of Anthony and Miller, a wildly successful comedy team, can be traced back several years to Harvey Miller’s stage fright on the golf links. Although the son of a skilled golfer and an outstanding player in his own right, Miller is too nervous to golf in front of a gallery. He becomes coach and caddy for Joe Anthony, his girlfriend’s brother, who must convince his fisherman father that hitting a little ball into a hole can be more lucrative than trawling the Pacific Ocean. While on the PGA tour, their natural comedic abilities are recognized by a shrewd agent who senses their talent and potential, and a new comedy team is born.