The Delicate Delinquent is Jerry Lewis‘ first solo film without Dean Martin – but it’s worth watching for more than that.   In the title role, Jerry Lewis plays the part of Sidney Pythias, who is mistaken for a gang member during a police round-up.  A caring police officer named Damon, played by Darren McGavin, intercedes in the directionless young man’s life, for the better.   The movie was originally written for the team of Martin and Lewis, with the title characters’ names referring to the Greek myth of Damon and Pythias, inseparable friends.   Darren McGavin does excellently in the role of Officer Damon, who is “bucking the system” by trying to rehabilitate delinquents. 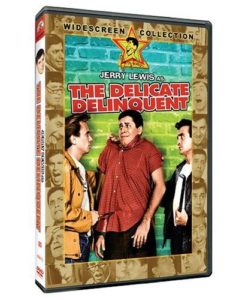 Jerry Lewis is very funny in the comedy moments.  I loved the interaction with the slightly-mad scientist who lives in Sidney’s building, as well as the opening sequence and later on fumbling through the police academy.  But Jerry also displays his acting skills in the movie’s more serious moments.

Both comedy and drama, it’s a fairly well done (although lower budget) film, and definitely worth watching.