I can safely say that The Court Jester with Danny Kaye is one of the funniest movies that I’ve ever seen.  The film begins in medieval England with a band of outlaws led by the Black Fox, determined to put the rightful king of England on the throne.  The king is only a baby, with the tell-tale birthmark, a purple pimpernel, on his royal bottom.

In charge of the infant is Hubert Hawkins, a carnival performer played wonderfully by Danny Kaye.  He and Maid Jean (played by Glynnis Johns) must take the child to safety, hidden inside a secret compartment in a cart, as Danny Kaye pretends to be an old man, who has to ‘interpret’ for his ‘deaf granddaughter’ when interrogated by the king’s men – a very, very funny scene – ‘she stutters’.

They stay in a stable for shelter from a storm, and after revealing their true love for each other, and revealing the rebels’ plan needing to sneak into the castle for the audience’s sake, they are interrupted by another traveler seeking refuge from the storm – Giacomo (pronounced Jock-o-mo), king of jesters, and jester to the king! 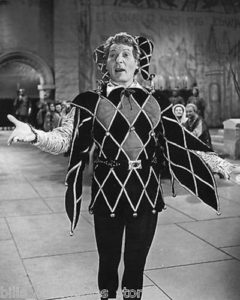 A quick blow to the head later, Maid Jean reveals her plan to Danny Kaye.  He must impersonate Giacomo, sneak into the castle, meet their “inside man” there.  By whistling a certain tune, and open the hidden passage so that the Black Fox and his men can storm the castle.  Frightened but willing, Hubert (Danny Kaye) impersonates Giacomo, and the next morning is off to the castle, while Maid Jean plans to take the infant to safety.

While ‘Giacomo’ is on the way to the castle, the pretty Maid Jean is taken by the king’s guards to the castle as well.  Once they are at the castle, misunderstandings and changing personalities come fast and furious.  At the castle is the king’s romantically-frustrated daughter, Princess Gwendolyn (Angela Lansbury).  Her maid Griselda has been promising that her “true love” is about to appear.  And the princess has had all that she intends to put up with.  Until Griselda persuades her that the newly-arrived Giacomo is her one true love.

Being a bit of a witch (or a hypnotist) Griselda hypnotizes “Giacomo” into being a brave, foolhardy suitor for the princess.  This leads to a hilarious scene where Danny Kaye is in the princess’ bedroom when her father comes in.  And every time someone snaps their fingers, Danny Kaye’s character changes from the bumbling Hubert to the swashbuckling suitor.  And back again.  More along this line happens later when in a hilarious sword fight with the villainous Sir Ravenhurst, played wonderfully by Basil Rathbone. 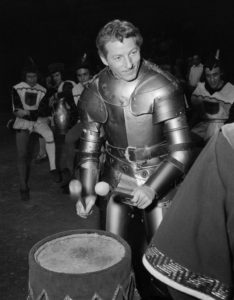 But before then, Basil Rathbone’s character wants to meet with Giacomo for a different reason.  The real Giacomo is not only a gifted jester but an assasin as well.  And later Griselda poisons the men that ‘Giacomo’ is expected to kill, in a very funny moment.  But when the princess reveals her love for the commoner ‘Giacomo’, he’s going to be killed.  Until the king decides to make him a knight.  Danny Kaye passing the knight tests is worth the price of admission!  So that a jealous suitor can meet him in a jousting tournament, which the Princess is determined that he win.

This leads Griselda to put poison in one of the two goblets that the contestants will drink from, and leading to the one the greatest verbal comedy exchanges of all time – ”the vessel with the pestle.” But ‘Giacomo’ miraculously wins without the poison, and the film, which wasn’t slow-paced before, really gains speed.  Soon the Black Fox and his men (including Herbert’s friends, midgets) are in the castle, a frenetic battle happens, along with the “snapping” sword fight between Danny Kaye’s character and Basil Rathbone’s – utterly, tears-running-down-your-face hilarious.  At the end, all is well, and this very, very funny movie is over all too soon.  A very funny movie, and well worth watching – highly recommended.

There’s a lot of verbal humor as well – check out the funny movie quotes from The Court Jester.

The throne of rightful king of England, the small babe with the purple pimpernel birthmark, has been usurped by the evil King Roderick. Only the Black Fox can restore the true king to the throne.  And all he needs is the king’s key to a secret tunnel. And while he’s trying to steal it, someone has to change the king’s diapers. The task falls to Hawkins, the gentlest member of the Fox’s band.

The Fox’s lieutenant, Maid Jean, guards Hawkins and the babe while they travel.  But when they meet the King’s new jester on the road, they decide to initiate a daring plan:  For Hawkins to replace him.  He’ll become an intimate at the court, and steal the key. So, humble Hawkins becomes Giacomo: the king of jesters and jester to the king. But things begin to get zany when the King’s daughter falls for Giacomo, the King falls for Jean, people randomly sing what are supposed to be recognition codes, and a witch with very effective spells (and poison pellets) begins to interfere.

Danny Kaye spoofs Robin Hood and Scaramouche in this inventive slapstick swashbuckler. Portraying the clownish but good-hearted entertainer Hawkins, he infiltrates the court of the corrupt Basil Rathbone (up to his usual brand of cruel villainy) disguised as the legendary king of jesters, Giacomo. After a court sorceress hypnotizes Hawkins into believing he is also a legendary assassin, Hawkins has more identities than he can keep straight, and Kaye zips back and forth between them at, literally, a snap of the fingers. Comic highlights include a wonderful sword fight with Rathbone in which he constantly switches identities, and the classic “chalice from the palace/vessel with pestle” wordplay as Hawkins plays “hide the poison” and forgets where it is. With comely Glynis Johns as his spy-in-arms love interest, Angela Lansbury as the scheming princess, and Mildred Natwick as the dotty spellcaster, this is Danny Kaye at his comic best. —Sean Axmaker

The Pipes of Pan – song lyrics