In The Apple Dumpling Gang Rides Again, Amos and Theodore (Tim Conway and Don Knotts) the two bumbling outlaw wannabees from The Apple Dumpling Gang are back. They are trying to make it on their own. When they arrive at the town they are going to, all sorts of things go awry. They accidentally subdue the town’s legendary lawman, Wooly Bill Hitchcock thus enraging him into tracking them down. They also are accused of bank robbery. And they “enlist” in the army, and burn down the fort. Amid all this the army is besieged by someone stealing their supplies. 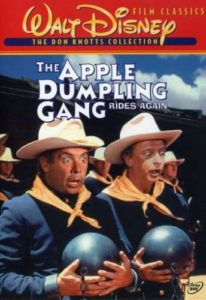 The 1979 sequel to The Apple Dumpling Gang reunites Tim Conway and Don Knotts as thieves with hearts of gold, this time helping out a soldier (Tim Matheson) whose commander (Harry Morgan) is being undermined by a villainous lieutenant. The film is for kids, but the adult-heavy plot takes this movie in a different direction than its predecessor, which focused on three adorable orphans. The slapstick comedy is good, and supporting cast, Morgan, Matheson, Ruth Buzzi and Jack Elam, are enjoyable, but the freshness of the first film is missing. —Tom Keogh

There’s more trouble afoot as The Apple Dumpling Gang (Don Knotts and Tim Conway) can’t stop causing trouble—and laughs—even when they give up their life of crime! First the ditsy duo is accused of bank robbery as they try to deposit a check. Then they join the U.S. Cavalry and wind up in the stockade for inadvertently blowing up their fort. Although they escape this mess, the witless team who could never shoot straight still can’t seem to succeed in going straight. It’s riotous, raucous fun as THE APPLE DUMPLING GANG RIDES AGAIN!