Niagara Falls, aka. Slowly I turned

Slowly I Turned is a classic skit (also known as Niagara Falls, The Stranger with a Kind Face, Pokomoko), for two speaking clowns, typically one tramp clown and the other clown can be any type (tramp/hobo, auguste, whiteface or character).

The basic skit has the tramp clown sitting forlorn on a park bench.  The second clown walks by, notices the first clown, and asks if he can help.

The tramp clown looks up and starts telling his sad story to this stranger with a kind face.

Tramp: I was not always a worthless bum.  Once, I had a happy life—well-educated, with a good job, a loving wife, and child.  Until the fateful day that I befriended a stranger down on his luck, and took him into my home.  One day, I came home from work, only to find that the stranger has run away with my wife.  I searched the world over, and eventually found my wife and the man in (Niagara Falls, Pokomoko, etc.) where I had my revenge! (As the tramp tells this story, he becomes more excited and shrill).  Slowly I turned, step by step (as he says this, he approaches the second clown, who begins backing away in fear) and I had my revenge!  I beat him (hits the second clown with a pillow or slapstick), over and over (repeats), and finally, put my hands around his wretched throat … (begins strangling the second clown, who breaks free).

Second clown: Stop it!  Wait a minute!  What’s wrong with you? 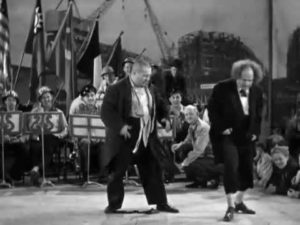 Tramp: (coming to his senses) Why …. you’re not him … you’re my friend, the stranger with a kind face!

Second clown: Yes, that’s right!  What’s the matter with you?

Tramp: [repentant, apologetic] I’m sorry, friend.  You see, whenever I hear (Niagara Falls, Pokomoko, etc.) it takes me back to that horrible moment and I want to kill … Kill … KILL! (starts toward the second clown)

Second clown:  Wait a minute!  I didn’t say it!

Tramp: Niagara Falls! (starts moving toward second clown) Slowly I turned, step by step, inch by inch until I began beating that miserable wretch (again begins beating second clown with pillow or slapstick, until second clown takes it away from him)

Second clown: Now stop that!  You can’t attack me just because I say Nia… that word!

Tramp: I’m sorry.  Please forgive me, friend.  Have you ever been there, by any chance?

Second clown: Oh, yes, I love it at Niagara Falls.  Oh! (clamps his hand over his mouth as he realizes that he’s said it again)

Tramp: Niagara Falls!  Slowly I turned, step by step, and then I … (realizes that he doesn’t have the pillow or slapstick, pulls out a bottle of seltzer water instead) grabbed a handful of Niagara Falls and threw it at him! (squirts the seltzer water at the second clown and chases him off the stage).

The Breastplate of Righteousness