A Night in Casablanca

A Night in Casablanca is the last Marx Brothers movie, and I’m happy to say,  one of their finest. The Marx Brothers had officially retired by this time.  However, they reunited on screen for the financial benefit of their brother  Chico. And I’m very glad they did. 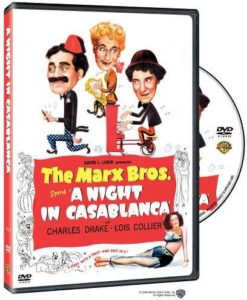 The humor here is less manic than in their early films.  After all, the youngest brother,  Groucho, was 56 at the time they made A Night in Casablanca.  But their performances are as smooth and confident as ever. In a nutshell, Groucho plays the part of Ronald Kornblow, offered the job of Manager of the  Hotel Casablanca.   The previous 3 managers have been murdered by ex-Nazis.  The villains are trying to find Nazi treasure hidden in the hotel. The obligatory love interest is suspected of having collaborated with the Nazis.  He tries to prove his innocence with the aid of Corbaccio (Chico), and Rusty (Harpo).  Rusty is valet to the villain, played by Sig Ruman (who was also the ‘heavy’ in  A Night at the Opera). 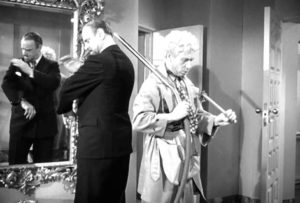 Some of the funniest moments in the Marx Brothers’ history  are in this film, including:

Editorial Review of  A Night in Casablanca, starring the Marx Brothers –  courtesy of Amazon.com 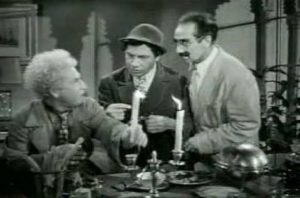 A Night in Casablanca may not qualify as a Marx Brothers classic, but it’s certainly the best of their latter-day comedies. This picture is funnier than all but a handful of their earlier ones,  wrote the usually cantankerous Pauline Kael, and she’s right.  The Big Store would have been the final Marx movie, but that disappointment, and an attractive new deal with United Artists, prompted the Marx trio to bring freshly anarchic energy to this post-war spoof of wartime intrigue, prompting Warner Bros. (producers of Casablanca) to threaten legal action over the title.  To which Groucho responded, “I am sure that the average movie fan could learn in time to distinguish between Ingrid Bergman and Harpo.” As it happens,  Night bears only passing resemblance to the Bergman/Bogart classic, with Groucho playing the new manager of a hotel in Casablanca, where several previous managers have been murdered while a scheming villain (Marx regular Sig Rumann) plots to steal the hotel’s cache of Nazi treasure. Chico and Harpo are up to their usual antics (including piano and harp interludes, respectively), and they all give Rumann the runaround in the film’s funniest and most perfectly choreographed scene. The brothers made their final film together with  Love Happy three years later, but as any fan will tell you, A Night in Casablanca was the last Marx comedy that mattered. —Jeff Shannon

Plot Synopsis of  A Night in Casablanca, starring the Marx Brothers –  courtesy of Amazon.com 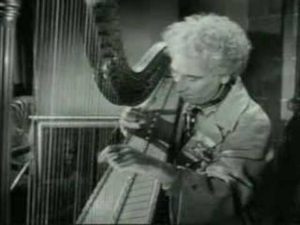 In post-war Casablanca, Ronald Kornblow (Groucho Marx) is hired to run a hotel whose previous managers have all wound up being murdered. French soldier Pierre suspects the involvement of ex-Nazis, specifically Count Pfefferman, in reality the notorious Heinrich Stubel. But Pierre himself is accused of collaborating with the enemy, and attempts to clear his name with the help of his girlfriend Annette and cagey buddy Corbaccio (Chico Marx). They enlist the aid of Pfefferman’s beleaguered mute valet, Rusty (Harpo Marx), and discover a hoard of war booty the Nazis have cached in the hotel.

Trivia for  A Night in Casablanca  (1946) starring the Marx Brothers