Tall Tales of a Short Clown

Editorial review of Tall Tales of a Short Clown, courtesy of Amazon.com 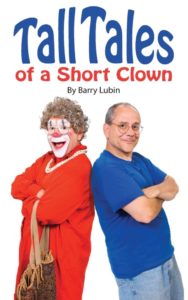 Tall Tales of a Short Clown is the story of Barry Lubin, whose alter ego, Grandma, became one of the most successful clowns in American history, and was named “The World’s Funniest Grandma” in Germany. Barry has entertained well over a hundred million people in circus rings, stadiums, arenas, on stage, in festivals, in films, and on television as the funny little carpetbagger with a mischievous view of the world. Barry is undoubtedly the only person to have achieved the combination of performing a running headstand onto a whoopee cushion on stage at Carnegie Hall, eating well over 10,000 bagels, and managing to piss off Ringo Starr, Meryl Streep, Gene Kelly, and Bruce Springstein as well as being inducted into the International Clown Hall of Fame. Tall Tales of a Short Clown follows Barry’s journey from Emerson College dropout to Clown College graduate, from his early failures on the Greatest Show on Earth to his induction into the Ring of Fame, the highest honor in clowning and in circus. He reveals his struggles with drug abuse and alcoholism and his journey into sobriety, his bout with thyroid cancer and his triumphant return to the ring, and his love affair with audiences on six continents over five decades, to earn his place as one of the most beloved clowns in history.

Clowns: In conversation with modern masters