The World of Clowns

The World of Clowns, by George Spreight 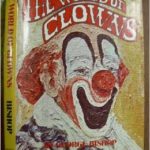 A wonderful book (now unfortunately out of print, but you should be able to find a copy in your library, used bookstore, or Amazon.com 🙂

It does not deal with make-up, costuming, skits, juggling, etc. It does deal with the history of clowning prior to the commedia del arte to the ‘present day’ of the 1950’s. If you’re looking for current information, you’ll have to look elsewhere, although it has a treasure trove of information from the heyday of the circus in the first half of the 20th century. It has interviews with several important clowns (such as  Bobby Kaye, George Fox), excellent photos from circuses from the 1890’s through the 1950’s, and some excellent introspection on what makes a clown a clown. It deals with the failure of the Ringling Bros. Clown College and why, the changes of the clown from the small 1-ring ‘mud show’ to the 3+ ring spectacular, the unique American addition to clowning of the carpet clown, famous clown routines (the burning house, several of  Lou Jacobs‘ routines  Felix Adler’s  3 little pigs walk-around, etc.), and many other things of interest to clowns, historians and friends.

Table of Contents for The World of Clowns