The Buster Keaton Collection presents three of the first films (one, The Cameraman, a near masterpiece) Keaton made for MGM beginning in 1928, an arrangement that gradually ushered the great comic actor and director into the sound era but ultimately deprived him of creative control.
The Cameraman, considered by many to be Keaton’s last important silent work, is an unusual story about a tintype portrait photographer (Keaton) who becomes a newsreel cameraman in order to win the heart of a secretary (Marceline Day). After flubbing an assignment by double-exposing some action footage, the hapless hero tries to prove himself in several memorable sequences of Keatonesque knockabout comedy (including a Chinatown street battle). There are also a couple of grace notes, such as a scene set in Yankee Stadium in which a solo Keaton exquisitely mimes the moves and attitudes of a pitcher. But The Cameraman‘s strange, almost subconscious power is in its variation on an old Keaton refrain: The hero’s conflict over different kinds of authenticity, represented here on either side of a motion picture lens–the difference between capturing something real and living it. 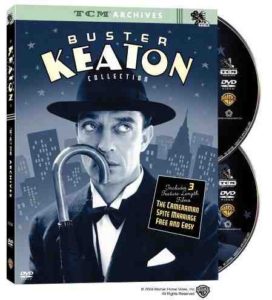 The Cameraman shows obvious and unfortunate signs of MGM’s insistence that Keaton, long accustomed to improvising scenes, conform to prepared shooting scripts. But it is less stifling than the second feature (Keaton’s last silent movie) in this set, the 1929 Spite Marriage, a slight farce about a pants-presser (Keaton) who borrows his customers’ fine threads to attend the theatre every night. There he worships an actress (Dorothy Sebastian) so furious with her caddish lover and co-star (Edward Earle) that she asks Keaton to marry her. The predictable results are unworthy of a Keaton film, but he does shine in several hilarious sequences, such as a disastrous turn as a bit player in his soon-to-be-wife’s stage dramas.
Finally, 1930’s Free and Easy, Keaton’s talkie debut, is a garish MGM valentine to itself, trotting out celebrity actors and directors (Lionel Barrymore, Cecil B. DeMille, Fred Niblo) in a wooden story set on a movie lot. But while Keaton struggles with dialogue and a script that frequently sidelines him, he has many good moments causing havoc on film sets. –Tom Keogh