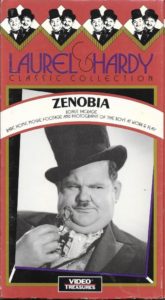 Like The Fighting Kentuckian, Zenobia is one of the few movies that Oliver Hardy made without his partner Stan Laurel after their partnership.  Unlike The Fighting Kentuckian, however, in Zenobia Oliver Hardy is the star of the show, and he carries the comedy very well.   The basic plot has a country doctor named Tibbett, played very well by Oliver Hardy, married to a scatterbrained wife (played wonderfully by Billie Burke).  The movie begins with Oliver Hardy’s Dr. Tibbett delivering a baby boy … for a family that already has at least 5 daughters.  Oliver Hardy tells the father, about his medical bill, “Don’t worry … this one’s on me.”  In addition to being visually funny, it also sets a characteristic of Dr. Tibbett – that he’s a fine doctor, but a lousy businessman; this becomes important later on. END_OF_DOCUMENT_TOKEN_TO_BE_REPLACED