I have to admit being pleasantly surprised by Dear God.  Originally, I was only going to review it for completeness’ sake, as part of the Tim Conway reviews.  I picked it up at my local Wal-Mart for only $4.00, and figured that even a little bit of Tim Conway was worth $4.00, even if the rest of the movie was a waste.  It wasn’t, for several reasons. 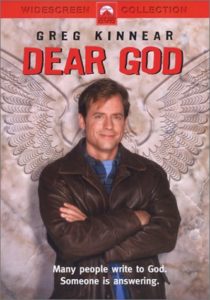 First, Tim Conway has a fair amount of screen time, and is hilarious in every scene he’s in, and he’s in a lot of scenes.  Another bonus is the number of good actors, who absolutely glow in their time on screen, in roles large and small.  Also, I was pleasantly surprised by Laurie Metcalf.  I wasn’t a fan of hers on Roseanne, and was pleased that she played her role well, with a talent for comedy.

The beginning of Dear God is a little slow as it tries to establish Greg Kinnear’s character.  He plays Tom Turner, as a small-time con artist, who is eventually caught by the police.  And given the choice by a judge between prison or holding down a job for a year.  To give him a taste of what it takes to earn the money that he so thoughtlessly cons people out of.

He manages to get a job with the U.S. Postal Service with the help of his uncle, where he’s soon assigned to the dead letter office, managed by Hector Elizondo (one of my favorite actors).  He is working with a group of misfits, including Tim Conway as Dooley.  Dooley is a mailman who memorized the entire addresses for Los Angeles.  But was demoted after losing his temper and biting a dog—and is now paranoid, untrusting, and hilarious.  Other misfits include Laurie Metcalf’s character, a former lawyer who’s borderline insane, several others who are just lazy, etc.

There are several categories of undeliverable mail, including letters sent to God.  Tom Turner reads one, and is touched by this woman’s story who is living in a decrepit apartment building.  Tom is not reformed in any way at this point.  In fact, he’s trying to steal some unclaimed items when he is caught.  So he makes up a story about returning lost merchandise and mails the items to this woman.  As well as unintentionally mailing her his paycheck.  Laurie Metcalf’s character sees this and thinks that he’s helping this woman out of the goodness of his heart.  She prompts, and virtually forces, him to do it again.  This time, helping a woman who’s critically ill daughter wants a pony ride.

Things began to snowball from there, and soon Tom and the other ‘losers’ are trying to answer other letters to God, helping to prevent a suicide (played well by another favorite, Jack Klugman, who proves the old adage that there are no small parts, only small actors), among other good deeds.  Along the way, the ‘broken’ postal workers begin to become more functional, including Tom himself.  There’s a very nice scene where Tom has a conversation with a priest about Doubting Thomas and the nature of faith.

There’s necessary conflict in the movie, of course, including a loan shark that the gambler Tom owes money to.  As well as the authorities who want to crack down on these people who are (technically) breaking the law by reading someone else’s mail, The movie ends in a climactic courtroom scene, that borrows too much from Frank Capra’s Miracle on 42nd Street.  Overall, a good, but not great, film.  I rate it 3 out of 5 clowns.

Greg Kinnear’s limited talents are stretched too thin in his role as a selfish con man who becomes a nice guy after being sentenced to work at the dead-letter department of an L.A. post office. Deciding that it’s nicer to help people than rip them off, Kinnear’s character leads a band of mailroom wackos in responding to the entreaties of those who write to God for divine help via the mailbox. The film strains to be reminiscent of Frank Capra’s populist comedies while also covering a lot of other, far less sophisticated comedy bases.

Laurie Metcalf is mostly irritating as a neurotic postal worker who tries to keep the hero out of jail, when it’s discovered he’s removing dead letters from their basement burial ground. Hector Elizondo does his dignified thing, and Jack Klugman and Roscoe Lee Browne are somewhere in the mix. Tim Conway is the best element, a half-crazed mailman with the only shred of real humanity in this supposedly human tale. —Tom Keogh