Some of  Charlie Chaplin‘s funniest comedies were the short films that he made for the Mutual Film Corporation.   This collection of short films includes some of his best, most with his frequent co-stars  Edna Purviance and  Eric Campbell. 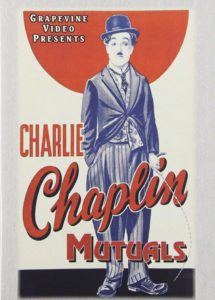 The DVD includes twelve short films directed and written by  Charlie Chaplin, restored from premier quality original 35mm film, with additions and improvements from new film materials which have surfaced.   Extras include  The Gentleman Tramp, the 1975 feature-length film.   Also included is  Chaplin’s Goliath, the 1996 documentary of Eric Campbell, the huge Scottish actor who achieved screen immortality as the ‘heavy’ in the Chaplin Mutual comedies, as well as  The Mutual-Chaplin Specials, Making The Gentleman Tramp, Stills Gallery containing more than ninety rare images, many of them behind-the-scenes shots never before published.

The 12 short films included on the DVD are: