The 1914 Keystone silent comedy, The Knockout, is a typical, frenetic Keystone comedy starring Fatty Arbuckle.   Despite what moviegoers might think from the movie poster, Charlie Chaplin is not the star of the movie.  Technically he’s not even a co-star, although he is on-screen during the boxing ring scene as the referee.

The Knockout is about two tramps, down on their luck, who set up a fake boxing match exhibition for a promoter.   Pug (played by Fatty Arbuckle) is a likable young man who offers to fight in the ring against the “champion” to impress his girlfriend — and then the actual boxing champ shows up 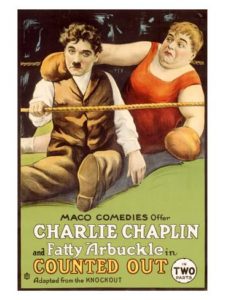 .   The center of the movie is the boxing ring sequence, where Charlie the Little Tramp attempts to referee the match — unsuccessfully.

Being a Keystone comedy, there’s a lot of frenetic energy, slapstick, and even an appearance by the Keystone Cops.

Trivia about The Knockout