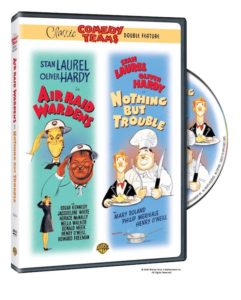 Laurel and Hardy made two films for the MGM studios in the 1940’s – Air Raid Wardens (1943) and Nothing But Trouble (1944).  Both films followed the MGM studio film formula at the time, which was not the best fit for the boys’ style of comedy.  Even so, both are enjoyable and worth watching.

Air Raid Wardens was a huge box-office success in 1943, and with good reason.  In the midst of World War II, unsuccessful businessmen Stan and Ollie try to enlist in the Army, but are turned down.  Undeterred, Laurel and Hardy try to do their part as civilian air raid wardens.  They humorously attempt to put up posters, help with first aid, and get their neighbor (and long-time comic foil) Edgar Kennedy to put out his porch light – all unsuccessfully.  After failing miserably, at their lowest point, the boys succeed in breaking up a Nazi spy ring.  Many funny moments, with more self-pity than normal in a Laurel and Hardy movie, it’s worth watching – especially with friends.

Working as the world’s worst chef and equally inept butler, Stan and Ollie wreck a fancy dinner party and, in the process, accidentally foil a plot to poison a young king-in-exile.

Whether serving their country in wartime or serving multicourse mealtime mayhem, Laurel and Hardy serve up laughs in this classic twofer. First, the nation calls out in its hour of need, Stan and Ollie answer…and Uncle Sam changes his mind. Rejected by the military, our heroes become Air Raid Wardens. Lights-out laughs include a donnybrook with slow-burn comic Edgar Kennedy and a run-in with a nest of spies. In Nothing but Trouble, the boys fuss and finagle as World War II-era domestics who rally ’round an exiled boy king when danger arises. Sam Taylor, co-director of Harold Lloyd’s famed hanging-from-the-clock-high-above-city-traffic movie Safety Last!, guides this romp that includes a gem of a ledge-hanging sequence. Hold tight for fall-down funny fun.

Funny movie quotes from Nothing But Trouble

Mrs. Elvira Hawkley: The last man I had stayed for several years. He’ll tell you I was most accommodating. In fact, I still get letters from him. He’s on an island somewhere in the Pacific. I think they call it Alcatraz.

Mrs. Elvira Hawkley: I thought a little spot of this might refresh you before taking up your new duties. It’s Chateauneuf 1924.
Stan (Stan Laurel): Gee, that’s pretty old. Haven’t you got anything new?

Oliver (Oliver Hardy): Well, there’s nothing to it. All you have to do is look the lion straight in the eyes. Lions are afraid of that. I read that in a book.
Stan (Stan Laurel): But did the lion read the book?

Oliver (Oliver Hardy): Come Stanley, let no one say that we were afraid to die.
Stan (Stan Laurel): I don’t care who says it.

Oliver (Oliver Hardy): We just like to see kids have fun.

How do I start Clowning? Clown Magic part 4

Now You See It, Now You Don’t